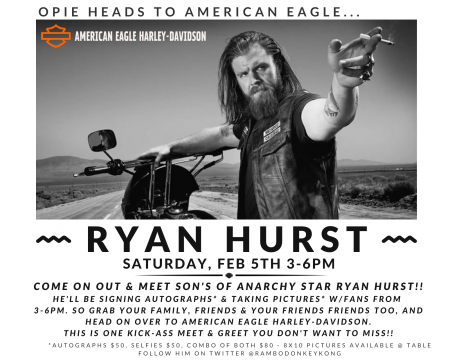 Guess who's coming to hang out at American Eagle, your kick-ass Harley-Davidson dealership...  Son's of Anarchy star Ryan Hurst!  That's right, on Saturday, Feb 5th he will be here signing autographs* & taking photos with fans from 3-6pm. You better come early, I'm sure there will be a line.

With a decades-long history in show business to his name, Ryan Hurst has racked up plenty of fascinating experiences. He's starred in films alongside the likes of Tom Hanks and Denzel Washington, recorded music for zombie apocalypses, and bonded with countless castmates. His best known roles have been on television: Hurst starred as fan favorite Opie on "Sons of Anarchy" before moving onto shows like "Bates Motel" and "Outsiders." More recently, Hurst brought the imposing villain Beta of "The Walking Dead" to fearsome life. Fans are even Campaigning for Ryan Hurst to Play Sentry in the MCU.

The thought of entering to win a trip to Daytona AND meeting Ryan Hurst all in one day, it doesn't get any better than that. We'll see you on Feb 4th!!